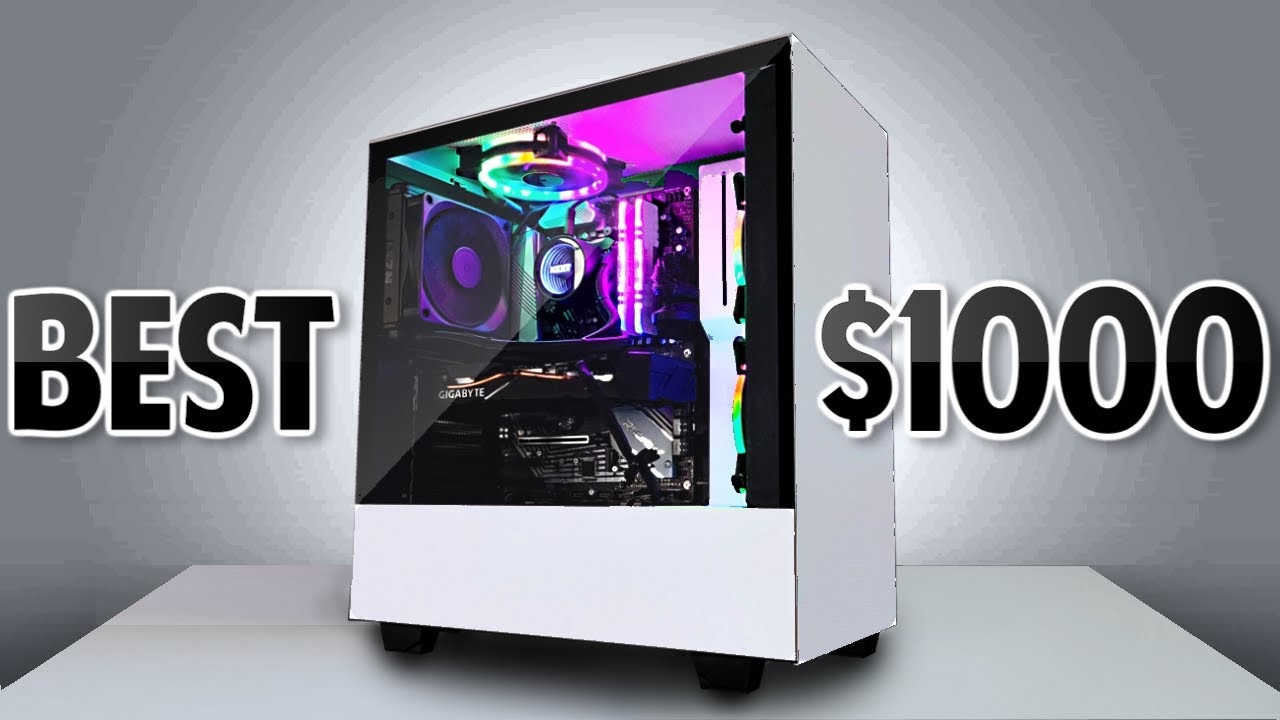 If you have right around $1,000 to spend on a new gaming PC build, you have enough to build a really solid system. For $1,000 you can build a gaming computer that can max out anything on a 1080P monitor easily. However, $1,000 in components will also allow you to max out most games on a 1440P monitor as well as serve as an entry-point into 4K gaming. In this guide, we’re going to give you a powerful $1,000 gaming PC build, including all of the components and parts you’ll need to get it up and running.

You’re not messing around anymore. No more consoles. No more cheap laptops. No more 10-year-old desktops that can barely run Minecraft. It’s finally time to ascend. This $1,000 gaming PC build is no joke. This thing is ready to handle anything you throw at. For specs, this $1,000 build comes with an AMD Ryzen 5 3600 processor, an RX 5700 XT 8GB graphics card, 16GB of RAM, a 1TB SSD, a tempered glass case, and a 7650W semi-modular 80PLUS Bronze power supply.

…and, how ridiculously high they are. This build can also handle gaming on a 1440P monitor with ease and will serve as a nice entry point into 4K gaming as well. So, even if you do start out with a 1080P monitor, this build can easily handle a monitor upgrade in the future, too. Ultimately, this $1,000 gaming computer is a powerful machine that will allow you to max out your favorite games for years to come. Check out the part list below:

Listen, nobody is a bigger Intel fan than I am. But, when it came down to finalize this part list, I felt like AMD’s Ryzen 5 3600X offered the better value. For me, there’s a lot of reasons why the 3600X makes sense over the Intel alternatives…

The Ryzen 5 3600X comes with a better stock cooler

So, yes, you could go with an i5-10400 in this situation—and, it would be cheaper to do so. However, the Ryzen 5 3600X has a better stock cooler—both from a performance standpoint and an aesthetics standpoint—and it can be overclocked, whereas the i5-10400 cannot. Also, as so many gamers these days are doing gameplay videos and streaming, having a system that can also work well for editing and content creation is a big plus. And, since the Ryzen 5 3600X outperforms the Intel Core i5-10400 in those types of tasks (editing, rendering, etc.), it just helps give the 3600X a little more of an edge.

I think with this build an RX 5700 XT makes the most sense at the moment. I think you could fit in an RTX 2070 SUPER, but you’d likely have to switch the 1TB SSD for a smaller SSD (or a traditional HDD), go with a lower-tier case, and probably downgrade the CPU and motherboard as well. For me, the performance difference between the RX 5700 XT and 2070 SUPER isn’t big enough to justify making all of those sacrifices—especially when you consider the real world difference between the two on a 1080P monitor.

The cheapest RTX 2070 SUPER right now comes in at just under ~$500, though, so, you will need to clear a lot of room in the budget to upgrade your GPU. But, if you can afford to stretch your budget that much, it would be worth your while—especially if you plan on playing games on a higher resolution monitor, or you’re going to take full advantage of NVIDIA’s raytracing technology.

While the growing consensus among gamers is that “you need 16GB of RAM in 2020,” in testing that I’ve done and the benchmarks I’ve seen, the extra 8GB of RAM doesn’t provide a huge performance increase in most cases.

However, as memory and GPU prices have started to come down to normal levels, there is now plenty of room in a $1,000 budget to be able to fit 16GB of RAM into your system. And, while there still isn’t a significant difference in performance between running 8GB of RAM and 16GB of RAM in the majority of games, by adding 16GB of RAM now, you will be more future-proofed for when games can fully utilize that extra memory.

For this build, we went with a 1TB SATA SSD. This should give you plenty of storage space for the forseeable future. You can also add a 1TB hard drive for ~$40 if you want a secondary drive option.

There are so many different gaming cases available in the ~$45-$75 price range that would work for this build. We chose the Corsair 275R Airflow mid tower case, though, because of its price, air flow potential, and aesthetics.

The case is fairly compact for a mid-tower case, but it has plenty of room to house the components of this build. It also comes with dual tempered glass side panels (which means your cable management needs to be on point behind the motherboard as well), a full length PSU shroud, and a grilled front panel that cand hold three 120mm fans for excellent air flow.

How Big of A Power Supply

We use Outervision’s PSU calculator to determine the power consumption for each of our builds. Accoding to Outervision, even in the most extreme scenarios, this $1,000 gaming PC will require a maximum of a quality 450W power supply. So, we went with a little bit of extra headroom with the Corsair CX 650M to ensure there would be no problems down the road. This will not only accommodate this build easily, but it will also allow for GPU upgrades in the future that won’t also require a power supply upgrade.